Service Discovery in a Microservices Architecture

Editor – This seven‑part series of articles is now complete:

You can also download the complete set of articles, plus information about implementing microservices using NGINX Plus, as an ebook – Microservices: From Design to Deployment. Also, please look at the new Microservices Solutions page.

This is the fourth article in our series about building applications with microservices. The first article introduces the Microservices Architecture pattern and discussed the benefits and drawbacks of using microservices. The second and third articles in the series describe different aspects of communication within a microservices architecture. In this article, we explore the closely related problem of service discovery.

Why Use Service Discovery?

In a modern, cloud‑based microservices application, however, this is a much more difficult problem to solve as shown in the following diagram. 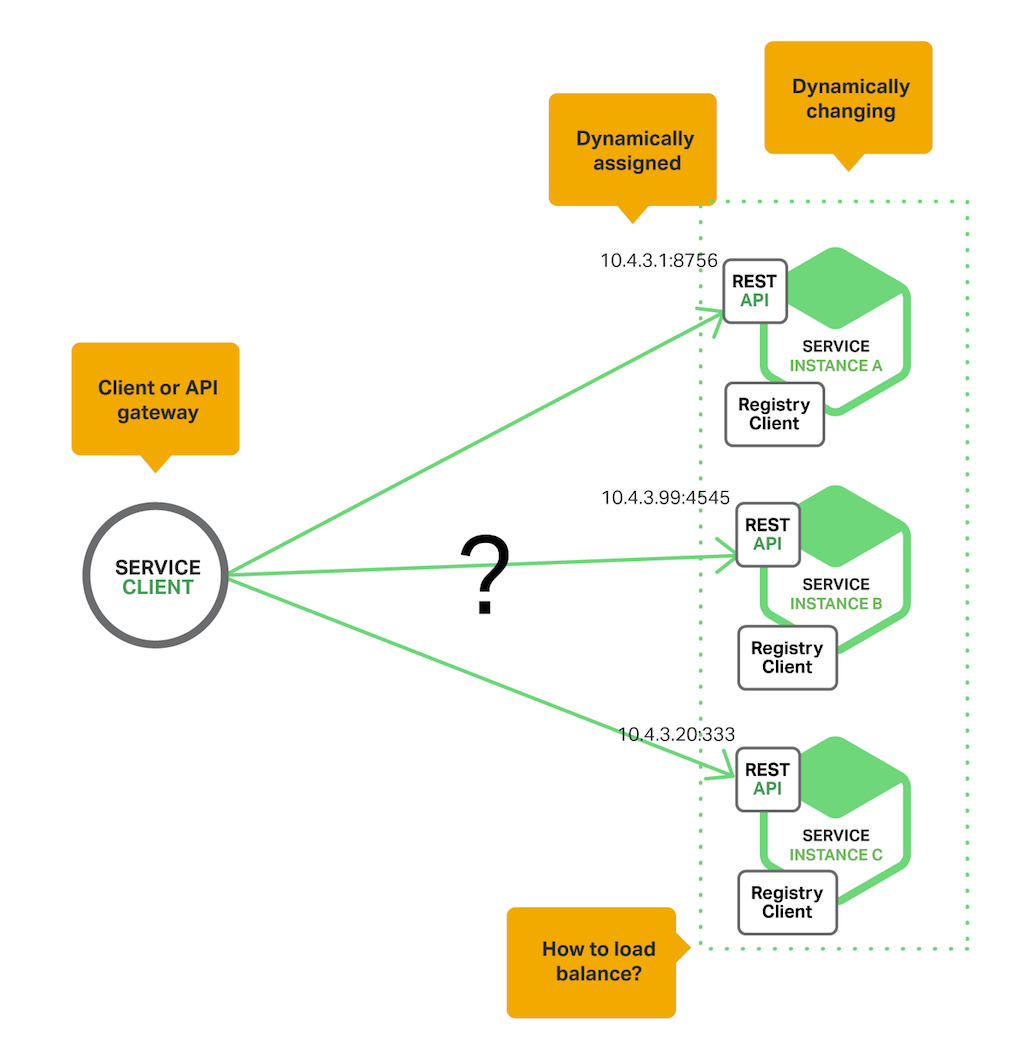 The following diagram shows the structure of this pattern. 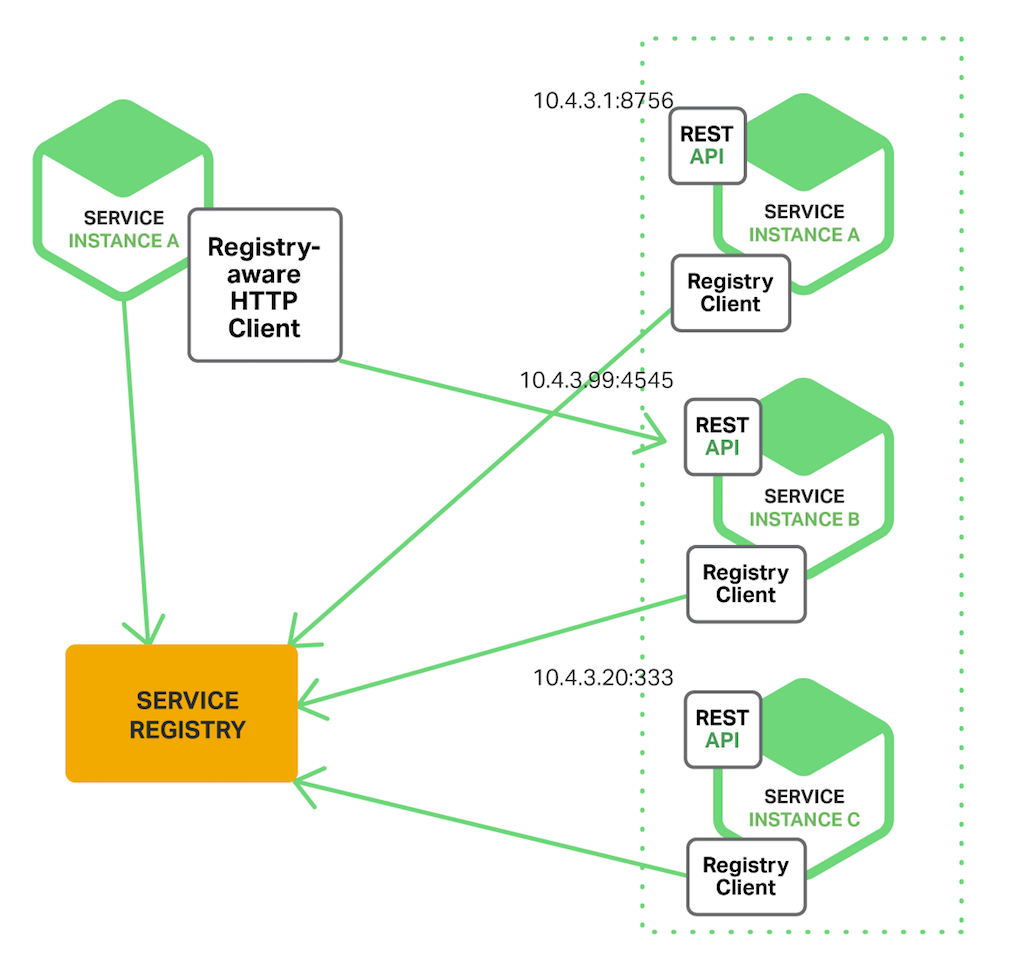 Netflix OSS provides a great example of the client‑side discovery pattern. Netflix Eureka is a service registry. It provides a REST API for managing service‑instance registration and for querying available instances. Netflix Ribbon is an IPC client that works with Eureka to load balance requests across the available service instances. We will discuss Eureka in more depth later in this article.

The client‑side discovery pattern has a variety of benefits and drawbacks. This pattern is relatively straightforward and, except for the service registry, there are no other moving parts. Also, since the client knows about the available services instances, it can make intelligent, application‑specific load‑balancing decisions such as using hashing consistently. One significant drawback of this pattern is that it couples the client with the service registry. You must implement client‑side service discovery logic for each programming language and framework used by your service clients.

The other approach to service discovery is the server-side discovery pattern. The following diagram shows the structure of this pattern. 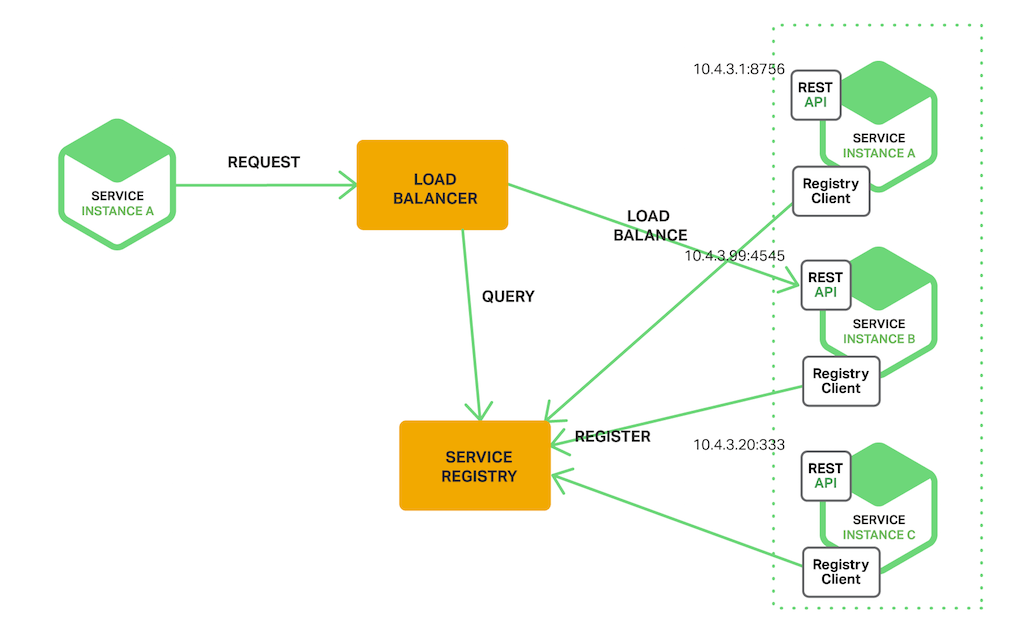 The AWS Elastic Load Balancer (ELB) is an example of a server-side discovery router. An ELB is commonly used to load balance external traffic from the Internet. However, you can also use an ELB to load balance traffic that is internal to a virtual private cloud (VPC). A client makes requests (HTTP or TCP) via the ELB using its DNS name. The ELB load balances the traffic among a set of registered Elastic Compute Cloud (EC2) instances or EC2 Container Service (ECS) containers. There isn’t a separate service registry. Instead, EC2 instances and ECS containers are registered with the ELB itself.

HTTP servers and load balancers such as NGINX Plus and NGINX can also be used as a server-side discovery load balancer. For example, this blog post describes using Consul Template to dynamically reconfigure NGINX reverse proxying. Consul Template is a tool that periodically regenerates arbitrary configuration files from configuration data stored in the Consul service registry. It runs an arbitrary shell command whenever the files change. In the example described by the blog post, Consul Template generates an nginx.conf file, which configures the reverse proxying, and then runs a command that tells NGINX to reload the configuration. A more sophisticated implementation could dynamically reconfigure NGINX Plus using either its HTTP API or DNS.

Some deployment environments such as Kubernetes and Marathon run a proxy on each host in the cluster. The proxy plays the role of a server‑side discovery load balancer. In order to make a request to a service, a client routes the request via the proxy using the host’s IP address and the service’s assigned port. The proxy then transparently forwards the request to an available service instance running somewhere in the cluster.

The server‑side discovery pattern has several benefits and drawbacks. One great benefit of this pattern is that details of discovery are abstracted away from the client. Clients simply make requests to the load balancer. This eliminates the need to implement discovery logic for each programming language and framework used by your service clients. Also, as mentioned above, some deployment environments provide this functionality for free. This pattern also has some drawbacks, however. Unless the load balancer is provided by the deployment environment, it is yet another highly available system component that you need to set up and manage.

Other examples of service registries include:

Also, as noted previously, some systems such as Kubernetes, Marathon, and AWS do not have an explicit service registry. Instead, the service registry is just a built‑in part of the infrastructure. 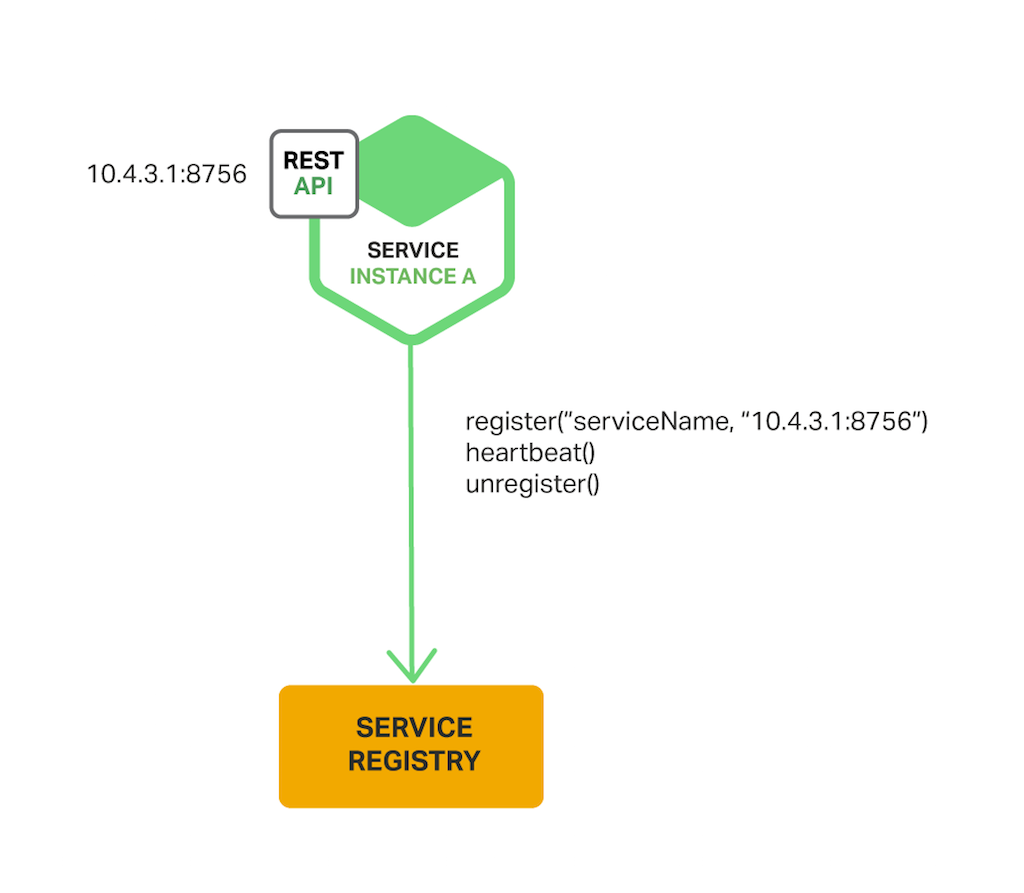 A good example of this approach is the Netflix OSS Eureka client. The Eureka client handles all aspects of service instance registration and deregistration. The Spring Cloud project, which implements various patterns including service discovery, makes it easy to automatically register a service instance with Eureka. You simply annotate your Java Configuration class with an @EnableEurekaClient annotation.

The self‑registration pattern has various benefits and drawbacks. One benefit is that it is relatively simple and doesn’t require any other system components. However, a major drawback is that it couples the service instances to the service registry. You must implement the registration code in each programming language and framework used by your services.

The alternative approach, which decouples services from the service registry, is the third‑party registration pattern. 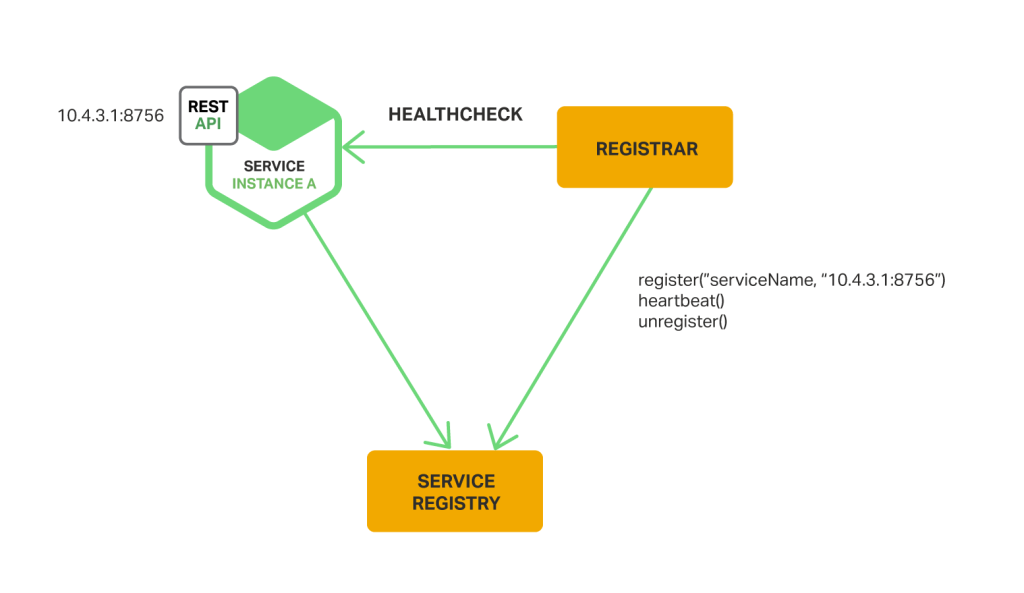 One example of a service registrar is the open source Registrator project. It automatically registers and deregisters service instances that are deployed as Docker containers. Registrator supports several service registries, including etcd and Consul.

Another example of a service registrar is NetflixOSS Prana. Primarily intended for services written in non‑JVM languages, it is a sidecar application that runs side by side with a service instance. Prana registers and deregisters the service instance with Netflix Eureka.

The third‑party registration pattern has various benefits and drawbacks. A major benefit is that services are decoupled from the service registry. You don’t need to implement service‑registration logic for each programming language and framework used by your developers. Instead, service instance registration is handled in a centralized manner within a dedicated service.

One drawback of this pattern is that unless it’s built into the deployment environment, it is yet another highly available system component that you need to set up and manage.

In a microservices application, the set of running service instances changes dynamically. Instances have dynamically assigned network locations. Consequently, in order for a client to make a request to a service it must use a service‑discovery mechanism.

In some deployment environments you need to set up your own service‑discovery infrastructure using a service registry such as Netflix Eureka, etcd, or Apache Zookeeper. In other deployment environments, service discovery is built in. For example, Kubernetes and Marathon handle service instance registration and deregistration. They also run a proxy on each cluster host that plays the role of server‑side discovery router.

An HTTP reverse proxy and load balancer such as NGINX can also be used as a server‑side discovery load balancer. The service registry can push the routing information to NGINX and invoke a graceful configuration update; for example, you can use Consul Template. NGINX Plus supports additional dynamic reconfiguration mechanisms – it can pull information about service instances from the registry using DNS, and it provides an API for remote reconfiguration.

In future blog posts, we’ll continue to dive into other aspects of microservices. Sign up to the NGINX mailing list (form is below) to be notified of the release of future articles in the series.

Editor – This seven‑part series of articles is now complete:

You can also download the complete set of articles, plus information about implementing microservices using NGINX Plus, as an ebook – Microservices: From Design to Deployment.

Guest blogger Chris Richardson is the founder of the original CloudFoundry.com, an early Java PaaS (Platform as a Service) for Amazon EC2. He now consults with organizations to improve how they develop and deploy applications. He also blogs regularly about microservices at https://microservices.io.