Had a large coat completed out of the skins of the Tiger Cat and those also of a small animal [1] about the size of a squirrel not known to me; these skins I procured from the Indians who had previously dressed them and formed them into robes; it took seven of these robes to complete the coat.    we had determined to send out two hunting parties today but it rained so incessantly that we posponed it.    no occurrence worthy of relation took place today.—

The implyments used by the Chinnooks Clatsops Cuth-lah-mahs &c in hunting are the gun the bow & arrow, deadfalls, [2] pitts, snares, and spears or gigs; their guns are usually of an inferior quality being oald refuse American & brittish Musquits which have been repared for this trade. there are some very good peices among them, but they are invariably in bad order; they apear not to have been long enouh accustomed to fire arms to understand the management of them.    they have no rifles. Their guns and amunition they reserve for the Elk, deer and bear, of the two last however there are but few in their neighbourhood. they keep their powder in small japaned [3] tin flasks which they obtain with their amunition from the traders; when they happen to have no ball or shot, they substitute gravel or peices of potmettal, and are insensible of the damage done thereby to their guns. The bow and arrow is the most common instrument among them, every man being furnished with them whether he has a gun or not; this instrument is imployed indiscriminately in hunting every species of anamal on which they subsist. Their bows are extreamly neat and very elastic, they are about two and a half feet in length, and two inches in width in the center, thence tapering graduly to the extremities where they are half an inch wide    they are very flat and thin, formed of the heart of the arbor vita or white cedar, the back of the bow being thickly covered with sinews of the Elk laid on with a gleue which they make from the sturgeon; the string is made of sinues of the Elk also.    the arrow is formed of two parts usually tho' sometime entire; those formed of two parts are unequally divided that part on which the feathers are placed occupyes four fifths of it's length and is formed of light white pine reather larger than a swan's quill, in the lower extremity of this is a circular mortice secured by sinues roled arround it; this mortice receives the one end of the 2nd part which is of a smaller size than the first and about five inches long, in the end of this the barb is fixed and confined with sinue, this barb is either stone, iron or copper, if metal in this form [4] forming at it's point a greater angle than those of any other Indians I have observed.    the shorter part of the arrow is of hearder woods as are also the whole of the arrow when it is of one piece only.    as these people live in a country abounding in ponds lakes &c and frequently hunt in their canoes and shoot at fowl and other anamals where the arrow missing its object would be lost in the water they are constructed in the manner just discribed in order to make them float should they fall in the water, and consequently can again be recovered by the hunter; the quiver is usually the skin of a young bear or that of a wolf invariably open at the side in stead of the end as the quivers of other Indians generally are; this construction appears to answer better for the canoe than if they were open at the end only.    maney of the Elk we have killed since we have been here, hae been wounded with these arrows, the short piece with the barb remaining in the animal and grown up in the flesh.—    the deadfalls and snares are employed in taking the wolf [5] the raccoon [6] and fox of which there are a few only.    the spear or gig is used to take the sea otter, the common otter, spuck, and beaver.    their gig consists of two points or barbs and are the same in their construction as those discribed before as being common among the Indians on the upper part of this river.    their pits are employed in taking the Elk, and of course are large and deep, some of them a cube of 12 or 14 feet. these are usually placed by the side of a large fallen tree which as well as the pit lye across the roads frequented by the Elk.    these pitts are disguised with the slender boughs of trees and moss; the unwary Elk in passing the tree precipitates himself into the pitt which is sufficiently deep to prevent his escape, and is thus taken.— 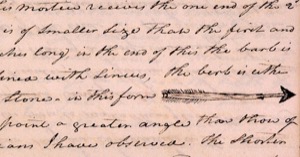 Summary | 3 Annotations
Dead
2020/08/11 21:54
The implyments used by the Chinnooks Clatsops Cuth-lah-mahs &c in hunting are the gun the bow & arrow, deadfalls, [2] pitts, snares, and spears or gigs;
2020/08/11 21:55
The bow and arrow is the most common instrument among them, every man being furnished with them whether he has a gun or not; this instrument is imployed indiscriminately in hunting every species of anamal on which they subsist
2020/08/11 21:56