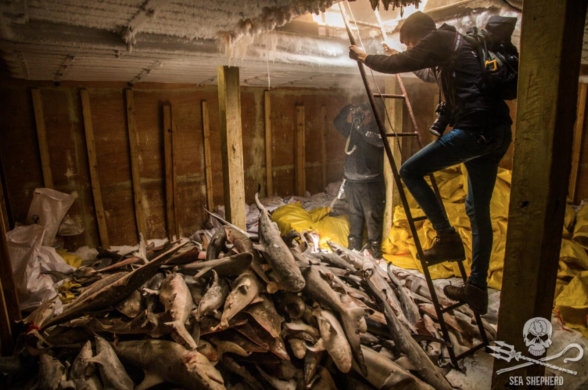 In Timor Leste law shark hunting is illegal, but that didn't prevent the firm from sending vessels out to the country's waters recently to illegally catch thousands of sharks, it alleged.

In September Sea Shepherd caught 15 vessels filled with thousands of sharks, using gill nets to land-internationally protected endangered species. "Banned from hunting for sharks in Indonesia's waters, these shark-hunting vessels prey on Timor Leste, an impoverished country with no resources to patrol or regulate their waters."

Pingtan Marine Enterprise, listed on the US NASDAQ exchange, has been banned in the past from fishing in Indonesian waters. The company did have fishing licenses from the Timor Leste government, but not for shark hunting, said Sea Shepherd.

It also claimed the same fleet of illegal shark fishing vessels were caught in August 2017 in a restricted marine sanctuary near the Galapagos Islands. "Though the crew was arrested, the private company still thrives on breaking international laws to feed the demand of the shark fin industry."

Select your interests Please select at least one newsletter d indicates our daily newsletters | 2w indicates twice-weekly | All others sent weekly All briefings are sent weekly, unless otherwise indicated

Fill in your details

How we handle your data We never share, sell or distribute our subscribers’ data. You may at any time unsubsribe from our newsletters, and request that we erase all information stored about you. Please check our Privacy policy for more details.[x]

We use MailChimp as our email campaign platform. By subscribing, you agree that the information you provide will be transferred to MailChimp for processing in accordance with their privacy policy and terms.
Please select at least one newsletter!
Thank you. Please check your inbox to confirm your selection and start receiving newsletters.

This field is required

We’ve sent a link to to change your password.

Please check your inbox to reset your password securely and easily.