Early this morning Joseph Fields came over and informed me that Reubin Feilds Drewyer and himself had killed four Elk.    as the party with me were now but weak and the Indians constantly crouding about our camp, I thought it best to send a few men to dry the meat on the other side of the river; accordingly Sergt Pryor and two men returned with Jos. Fields for that purpose.    the hunters were ordered to continue the chase; while the others were employed in drying the meat. I have had no account as yet from the party below the entrance of Quicksand river. The Indians continued to visit us today in considerable numbers    most of them were decending the river with their families.    these poor people appeared to be almost starved, they picked up the bones and little peices of refuse meat which had been thrown away by the party.    they confirm the report of the scarcity of provision among the natives above. I observe some of the men among them who wear a girdle arround the waist between which and the body in front they confine a small skin of the mink or polecat [1] which in some measure conceals the parts of generation, they also frequently wear a cap formed of the skin of the deer's head with the ears left on it, they have some collars of leather wrought with porcupine [2] quills after the method of the Shoshonees. From this place Mount Hood bears S. 85° E. distant 40 miles. This evening we completed drying the flesh of the Elk which had been brought to camp.    at 6 P. M. Capt. Clark returned, having completely succeeded in his expedition.    he found the entrance of the large river of which the Indians had informed us, just at the upper part of wappetoe Island.    the following is a sketch of the rivers furnished Capt C. by an old and inteligent Indian man.— [3]

The water had fallen in the course of last night five inches. I Set out and proceeded up a Short distance [5] and attempted a Second time to fathom the river with my cord of 5 fathom but could find no bottom.    the mist was So thick that I could See but a Short distance up this river.    where I left it, it was binding to the East of S. E.    being perfectly Satisfyed of the Size and magnitude of this great river which must Water that vast tract of Country betwen the Western range of mountains and those on the Sea coast and as far S. as the Waters of Callifornia about Latd. 37° North I deturmined to return.    at 7 oClock A. M. Set out on my return.    the men exirted themselves and we arived at the Ne er cho ki oo house in which the nativs were So illy disposed yesterday at 11 A. M. I entered the house with a view to Smoke with those people who Consisted of about 8 families, finding my presence alarmed them So much that the children hid themselves, womin got behind their men, and the men hung their heads, I detained but a fiew minits and returnd on board the canoe. My pilot who Continued in the Canoe informed me on my return that those people as well as their relations were very illy disposed and bad people. I proceeded on along the South Side met five canoes of the Shah-ha-la Nation from the Great rapids with their wives and Children decending the Columbia into this fertile Vally in pursute of provisions.    my Pilot informed me in a low voice that those people were not good, and I did not Suffer them to come along Side of my Canoe which they appeared anxious to do.    their numbers in those canoes who appeard anxious to come along Side was 21 men and 3 boys.    at 3 P M. we arived at the residence of our Pilot [6] which consists of one long house with Seven appartments or rooms in Square form about 30 feet each room opening into a passage which is quit through the house    those passages are about 4 feet in width and formed of Wide boads Set on end in the ground and reaching to the Ruff which Serves also as divisions to the rooms. The ground plot is in this form [7]    1 1 1 1 is the passages.    2 2 &c. is the apartments about 30 feet square.    this house is built of bark of the White Cedar Supported on long Stiff poles resting on the ends of broad boads which form the rooms &c.    back of this house I observe the wreck of 5 houses remaining of a very large Village, the houses of which had been built in the form of those we first Saw at the long narrows of the E-lute Nation with whome those people are connected. [8] I indeavored to obtain from 〈them〉 those people of the Situation of their nation, if scattered or what had become of the nativs who must have peopled this great town. an old man who appeared of Some note among them and father to my guide brought foward a woman who was badly marked with the Small Pox and made Signs that they all died with the disorder which marked her face, [9] and which She was verry near dieing with when a Girl.    from the age of this woman this Distructive disorder I judge must have been about 28 or 30 years past, and about the time the Clatsops inform us that this disorder raged in their towns and distroyed their nation. Those people Speak a different language from those below tho' in their dress habits and manners &c. they differ but little from the Quathlahpohtles.    theire women ware the truss as those do of all the nations risideing from the quathlahpohtle to the enterance of Lewis's river and on the Columbia above for Some distance.    those people have Some words the Same with those below but the air of their language is entirely different, their men are Stouter and much better made, and their womin ware larger & longer robes than those do below; those are most commonly made of Deer Skins dressed with the hair of them.    they pay great attention to their aged Severall men and women whom I observed in this village had arived at a great age, and appeared to be helthy tho' blind. I provailed on an old man to draw me a Sketch of the Multnomar River ang give me the names of the nations resideing on it which he readily done, See draft on the other Side [10]    and gave me the names of 4 nations who reside on this river two of them very noumerous. The first is Clark a-mus nation reside on a Small river which takes its rise in Mount Jefferson and falls into the Moltnomar about 40 miles up.    this nation is noumerous and inhabit 11 Towns.    the 2d is the Cush-hooks who reside on the N E. Side below the falls, the 3rd is the Char-cowah [11] who reside above the Falls on the S W. Side    neether of those two are noumerous. The fourth Nation is the Cal-lar-po-e-wah [12] which is very noumerous & inhabit the Country on each Side of the Multnomar from its falls as far up as the knowledge of those people extend. they inform me also that a high mountain passes the Multnomar at the falls, [13] and above the Country is an open plain of great extent. 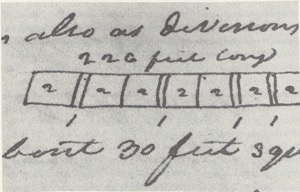 I purchased 5 dogs of those people for the use of their Oil in the Plains, and at 4 P M left the Village and proceeded on to Camp where I joind Capt. Lewis [14]

The enterance of Multnomah river is 142 miles up the Columbia river from its enterance into the Pacific Ocean—.    in my absence and Soon after I left camp Several Canoes of men women and Children came to the camp.    and at one time there was about 37 of those people in Camp Capt Lewis fired his Air gun which astonished them in Such a manner that they were orderly and kept at a proper distance dureing the time they Continued with him—    as maney as 10 Canoes arrived at Camp in the Course of this day.    they all Seem to give the Same account of the Scercity of Provisions above.    one family Continued all night and behaved themselves in a very orderly manner.

on the 3rd Joseph Field returned from the woods and informed the Drewyer Rubin & himself had killed four Elk. Capt L. Sent Sergt. Pryor and two men with Joseph Field to dry the flesh of the Elk in the woods on Scaffolds with fire.    the party bilow quick Sand river did not return to day. The Indians continue to vist our Camp in Considerable number from above with their families.    these pore people appeared half Starved.    they picked up the bones and little refuse meat which had been thrown away by the party. Capt L had the flesh of the 4 Elk which was killed on the 1st inst. dried—    Some of the men of the nativs who visited Capt Lewis wore a girdle, with a Small Skin in front and a Cap of the Skin of the deers head &c.

Summary | 1 Annotation
I indeavored to obtain from 〈them〉 those people of the Situation of their nation, if scattered or what had become of the nativs who must have peopled this great town. an old man who appeared of Some note among them and father to my guide brought foward a woman who was badly marked with the Small Pox and made Signs that they all died with the disorder which marked her face, [9] and which She was verry near dieing with when a Girl.    from the age of this woman this Distructive disorder I judge must have been about 28 or 30 years past, and about the time the Clatsops inform us that this disorder raged in their towns and distroyed their nation.
2020/09/04 16:54