There are two kinds of neurons involved in the transmission of any signal through the sympathetic system: pre-ganglionic and post-ganglionic. The shorter preganglionic neurons originate in the thoracolumbar division of the spinal cord specifically at T1 to L2~L3, and travel to a ganglion, often one of the paravertebral ganglia, where they synapse with a postganglionic neuron. From there, the long postganglionic neurons extend across most of the body.[4] 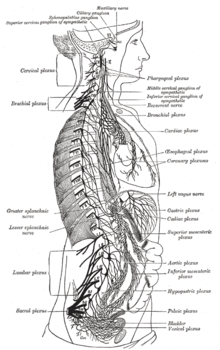 The sympathetic nervous system extends from the thoracic to lumbar vertebrae and has connections with the thoracic, abdominal, and pelvic plexuses.

Sympathetic nerves arise from near the middle of the spinal cord in the intermediolateral nucleus of the lateral grey column, beginning at the first thoracic vertebra of the vertebral column and are thought to extend to the second or third lumbar vertebra. Because its cells begin in the thoracolumbar division – the thoracic and lumbar regions of the spinal cord, the sympathetic nervous system is said to have a thoracolumbar outflow. Axons of these nerves leave the spinal cord through the anterior root. They pass near the spinal (sensory) ganglion, where they enter the anterior rami of the spinal nerves. However, unlike somatic innervation, they quickly separate out through white rami connectors (so called from the shiny white sheaths of myelin around each axon) that connect to either the paravertebral (which lie near the vertebral column) or prevertebral (which lie near the aortic bifurcation) ganglia extending alongside the spinal column.

To reach target organs and glands, the axons must travel long distances in the body, and, to accomplish this, many axons relay their message to a second cell through synaptic transmission. The ends of the axons link across a space, the synapse, to the dendrites of the second cell. The first cell (the presynaptic cell) sends a neurotransmitter across the synaptic cleft where it activates the second cell (the postsynaptic cell). The message is then carried to the final destination.

The postsynaptic cell then goes on to innervate the targeted end effector (i.e. gland, smooth muscle, etc.). Because paravertebral and prevertebral ganglia are relatively close to the spinal cord, presynaptic neurons are generally much shorter than their postsynaptic counterparts, which must extend throughout the body to reach their destinations.

A notable exception to the routes mentioned above is the sympathetic innervation of the suprarenal (adrenal) medulla. In this case, presynaptic neurons pass through paravertebral ganglia, on through prevertebral ganglia and then synapse directly with suprarenal tissue. This tissue consists of cells that have pseudo-neuron like qualities in that when activated by the presynaptic neuron, they will release their neurotransmitter (epinephrine) directly into the bloodstream.

Messages travel through the sympathetic nervous system in a bi-directional flow. Efferent messages can trigger changes in different parts of the body simultaneously. For example, the sympathetic nervous system can accelerate heart rate; widen bronchial passages; decrease motility (movement) of the large intestine; constrict blood vessels; increase peristalsis in the oesophagus; cause pupillary dilation, piloerection (goose bumps) and perspiration (sweating); and raise blood pressure. One exception is with certain blood vessels such as those in the cerebral and coronary arteries, which dilate (rather than constrict) with an increase in sympathetic tone. This is because of a proportional increase in the presence of β2 adrenergic receptors rather than α1 receptors. β2 receptors promote vessel dilation instead of constriction like α1 receptors. An alternative explanation is that the primary (and direct) effect of sympathetic stimulation on coronary arteries is vasoconstriction followed by a secondary vasodilation caused by the release of vasodilatory metabolites due to the sympathetically increased cardiac inotropy and heart rate. This secondary vasodilation caused by the primary vasoconstriction is termed functional sympatholysis, the overall effect of which on coronary arteries is dilation.[9]

The target synapse of the postganglionic neuron is mediated by adrenergic receptors and is activated by either norepinephrine (noradrenaline) or epinephrine (adrenaline).

The sympathetic nervous system is responsible for up- and down-regulating many homeostatic mechanisms in living organisms. Fibers from the SNS innervate tissues in almost every organ system, providing at least some regulation of functions as diverse as pupil diameter, gut motility, and urinary system output and function.[12] It is perhaps best known for mediating the neuronal and hormonal stress response commonly known as the fight-or-flight response. This response is also known as sympatho-adrenal response of the body, as the preganglionic sympathetic fibers that end in the adrenal medulla (but also all other sympathetic fibers) secrete acetylcholine, which activates the great secretion of adrenaline (epinephrine) and to a lesser extent noradrenaline (norepinephrine) from it. Therefore, this response that acts primarily on the cardiovascular system is mediated directly via impulses transmitted through the sympathetic nervous system and indirectly via catecholamines secreted from the adrenal medulla.

The sympathetic nervous system is responsible for priming the body for action, particularly in situations threatening survival.[13] One example of this priming is in the moments before waking, in which sympathetic outflow spontaneously increases in preparation for action.

Sympathetic nervous system stimulation causes vasoconstriction of most blood vessels, including many of those in the skin, the digestive tract, and the kidneys. This occurs as a result of activation of alpha-1 adrenergic receptors by norepinephrine released by post-ganglionic sympathetic neurons. These receptors exist throughout the vasculature of the body but are inhibited and counterbalanced by beta-2 adrenergic receptors (stimulated by epinephrine release from the adrenal glands) in the skeletal muscles, the heart, the lungs, and the brain during a sympathoadrenal response. The net effect of this is a shunting of blood away from the organs not necessary to the immediate survival of the organism and an increase in blood flow to those organs involved in intense physical activity.

General visceral afferent sensations are mostly unconscious visceral motor reflex sensations from hollow organs and glands that are transmitted to the CNS. While the unconscious reflex arcs normally are undetectable, in certain instances they may send pain sensations to the CNS masked as referred pain. If the peritoneal cavity becomes inflamed or if the bowel is suddenly distended, the body will interpret the afferent pain stimulus as somatic in origin. This pain is usually non-localized. The pain is also usually referred to dermatomes that are at the same spinal nerve level as the visceral afferent synapse.[citation needed]

Relationship with the parasympathetic nervous system[edit]

In heart failure, the sympathetic nervous system increases its activity, leading to increased force of muscular contractions that in turn increases the stroke volume, as well as peripheral vasoconstriction to maintain blood pressure. However, these effects accelerate disease progression, eventually increasing mortality in heart failure.[16]

Sympathicotonia is a stimulated[17] condition of the sympathetic nervous system, marked by vascular spasm,[18] elevated blood pressure,[18] and goose bumps.[18] A recent study has shown the expansion of Foxp3+ natural Treg in the bone marrow of mice after brain ischemia and this myeloid Treg expansion is related to sympathetic stress signaling after brain ischemia.[19]

The name of this system can be traced to the concept of sympathy, in the sense of "connection between parts", first used medically by Galen.[20] In the 18th century, Jacob B. Winslow applied the term specifically to nerves.[21]